Continuing our series on Women and Parliament, Dr. Jennifer Davey of the University of East Anglia looks at the influence of Mary, Countess of Derby (1824-1900) within the worlds of high politics and diplomacy. Lady Derby is the subject of her recent book, Mary, Countess of Derby, and the politics of Victorian Britain (OUP, 2019).

In May 1893, The Spectator printed a long article reflecting on the role and function aristocratic women had played in the social and political life of Victorian Britain. Sometimes referred to as ‘great ladies’, ‘female politicians’ or ‘political ladies’, these were women who held ‘definite influence over society, politics, and the general life of the exclusive’. As The Spectator emphasised, such influence was as ‘impalpable and in-definable as that of the weather, but never really denied by those who really understand how the world is governed’. One such woman was Mary, Countess of Derby (1824-1900), who worked, as she put it, ‘behind the scenes’ for almost forty years between the 1850s and the 1880s.

Born into a prominent Conservative family, Lady Derby received her first introductions to politics via her father, George West, fifth Earl De La Warr (who served as Lord Chamberlain under both Peel and Derby) and her god-father, the Duke of Wellington. At the age of 24 she married the 2nd Marquis of Salisbury, a man some 33 years older than herself. In between five pregnancies, Lady Derby gradually established Salisbury’s country estate – Hatfield House – as a meeting place for leading politicians. By the early 1860s, she had earned a reputation for bringing together ‘moderate men’. Indeed, throughout her career, she held on to the belief that ‘utopian government’ was one which was made of moderate men from both sides of Parliament.

Gradually, Lady Derby’s work at Hatfield afforded her an opportunity to influence Westminster politics. For instance, between 1865 and 1867, she worked as an adviser and conduit for those seeking to influence the debates in Parliament over franchise reform. Her work in the 1860s was not limited to domestic politics; she also cultivated links with diplomats, both in Britain and abroad. As the decade progressed, she emerged as a diplomatic agent, offering diplomats both informal advice and informal avenues to share news and gossip. Although aspects of her political work fitted into wider patterns of aristocratic female activity, there were other characteristics that marked her out as being unusual. In particular, there is little evidence to suggest that she was working to further the career of her husband (who had few political ambitions, and in any case, husband and wife lived very separate lives).

In 1868, Lady Derby’s first husband died, and she withdrew from political life. Two years later, the papers reported that she was due to marry the fifteenth Earl of Derby, the man some predicted to be a future leader of the Conservative Party. (His father, the fourteenth Earl, had served three times as Conservative prime minister.) As the new Countess, she continued to exercise autonomy over her political activities, but by virtue of her husband’s position found herself much closer to the centre of political power. Throughout the 1870s and 1880s she regularly found herself embroiled in Cabinet politics and intrigue, and she worked closely with both Disraeli and Gladstone. These men – alongside other male politicians – found Lady Derby a useful person to do business with, and they would call on her services for informal acts of persuasion or on her knowledge of the latest gossip as they tried to navigate the landscape of Westminster politics.

When Derby was appointed Foreign Secretary in Disraeli’s 1874 Cabinet, she was able to capitalize on her experience as a diplomatic agent. She did so with extraordinary results. In 1876, a major diplomatic crisis broke out in the Ottoman Empire, and, in the following two years, the Government found itself embroiled in protracted and fraught diplomatic negotiations. During this time, Lady Derby worked as an informal conduit and advisor for both diplomats and ministers. It brought her attention and, in the end, unwanted notoriety. At the height of the crisis, just as it looked as if the British Cabinet might be about to declare war on Russia, rumours started circulating that Government secrets were making their way from London to St Petersburg. Queen Victoria was certain she knew who the ‘great culprit’ was, and instructed her chaplain to write to Lady Derby, stopping just short of accusing her of treason. It was an accusation that contributed to Derby’s decision to resign as Foreign Secretary. That move prompted Lady Derby to cut all ties with her Conservative contacts, and to ‘begin a fresh’ with the Liberal Party. She was instrumental in her husband’s move from the Conservative benches to the Liberal Cabinet, and spent the final years of her political career offering advice and seeking to influence Liberal Ministers.

That Lady Derby was able to carve out a space for herself in Victorian political culture owed a large amount to her class. As a member of the aristocracy – first by birth, then by marriage – she had the contacts, time, money, and space, to engage with the politics of governing. Of course, being unable to hold political office, her methods were necessarily informal. She relied on social interactions – from letter-writing to hosting Society balls – to exercise political influence. These social interactions were not just sites of political opportunity, they also came with their own restrictions: the constitutional and legal frameworks that governed political life imposed boundaries on the amount of political power aristocratic women were able to exercise. 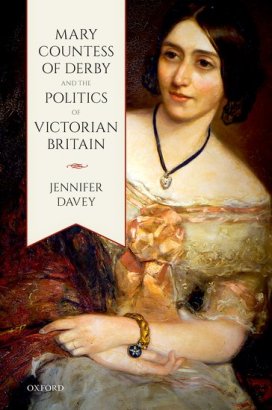 Yet Lady Derby was clearly able to have a career as a ‘female politician’. In doing so, she fitted into a wider pattern of female political activity. Although women had few legal or constitutional rights in nineteenth-century Britain, they were able to involve themselves, to varying degrees, in the political cultures of the nation. Paying attention to how women like Lady Derby were able to navigate political life offers insights into aspects of Victorian political culture which continue to shape our understanding of this crucial period.

One thought on “A female politician? Lady Derby and mid-Victorian political life”