At our first ‘Parliaments, Politics & People’ seminar of the new academic year, Dr Hannes Kleineke, Dr Ruth Ahnert, Professor Arthur Burns, and Professor Jane Winters offered some compelling insights into the evolution of digital humanities, its impact on the practice of history, the importance of interdisciplinary collaboration, and the management of digital projects. 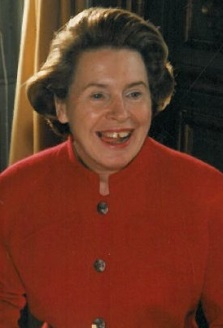 Our first session of the Parliaments, Politics and People seminar for the 2018/19 academic year was a round table discussion on digital humanities in memory of Valerie Cromwell (Lady Kingman), the History of Parliament’s former director and founder of the seminar, who sadly passed away earlier this year. The History of Parliament’s current director, Dr Stephen Roberts, started proceedings with a few words from Valerie’s former colleague, Dr Colin Brooks, who paid tribute to Valerie’s employment of audacious quantitative techniques in studying the voting patterns of nineteenth-century parliamentarians, her tireless efforts with the ICHRPI, and her leadership overseeing the digitisation of the History of Parliament as the Trust entered the computer age.

The History of Parliament’s Dr Hannes Kleineke opened the panel with a discussion on the evolution of digital resources for medieval historians since the early 1990s. Despite the existence of comparatively fewer sources than for later periods, there have been a number of ground-breaking digital humanities projects covering the middle ages, and Kleineke identified England’s Immigrants 1330-1550 and the Lexis of Cloth and Clothing Project as two shining examples.

However, he warned that while the advent of digital resources, such as British History Online, have simplified and expanded what is possible for the researcher, there remains a deep frustration with earlier resources (such as The Parliament Rolls of Medieval England on CD-ROM) that have fallen by the wayside, or been superseded by less intuitive versions. In light of this he called for newly developed resources to include a strategy for their continued compatibility, and a national or international digital humanities regulatory body that might oversee the continued evolution of the digital history landscape.

Dr Ruth Ahnert, Queen Mary University of London, then introduced her recent work on the AHRC-funded Tudor Networks of Power project, a network analysis of the 132,000 letters in the Tudor State Papers, which connect over 22,000 early modern correspondents. After an eighteen-month data cleaning process, Ahnert and her team were able to turn this enormous letter archive into a quantitative network that ranked correspondents by their activity, as well as their proximity to influence, and identified communities of correspondents.

Intriguingly, the analysis, which will be published via a forthcoming book and digital resource, has allowed researchers to identify network fingerprints for ‘types’ of correspondent. For instance, this has allowed for the identification of previously unknown spies during the period. Among other findings, the project has shed new light on the roles of women letter writers and their correspondence communities, and offered a means of charting how topics ‘trended’ across early modern Europe. Ahnert emphasised how interdisciplinary collaboration requires a shared commitment to understanding the concepts and concerns of each other’s disciplines, and requires the fostering of a truly collaborative, iterative working relationship among research teams, lessons she is hoping to take forward into two exciting new projects.

Our third speaker, Professor Arthur Burns, King’s College London, discussed his ongoing work with the Georgian Papers Programme, a ten-year project to digitise, conserve, curate and disseminate the 65,000 items in the Royal Archives and Royal Library for the period 1714-1837. He provided several insights into why he thinks digital humanities has been good for political history. Importantly, it has disciplined modern historians by forcing them to borrow and develop new skills, in order to create the complex hierarchies of data that provide the foundation for digital projects. The advent of digital resources has also broken the tyranny of the archivist or editor, and allowed historians to create their own archival structures and identify missing links (to political questions in the servants’ quarters or kitchen, for example) that weren’t there before. And finally he emphasised the rewarding aspects of ‘live’ collaboration between cataloguers, curators, digital developers, historians and other academics, who when working together inform and enrich each other’s work to an extent that had not been possible previously. Looking to the future he expressed his hope that a digital platform can be developed that allows collaborators on an international level to work together in real time to help historians reveal the missing links that the geographic separation of physical archives has previously precluded. He also stressed the need for political historians to drive future projects by working with experts in digital humanities to identify new research questions and work out what is possible.

Our final speaker was Professor Jane Winters, Professor of Digital Humanities at the School of Advanced Study. She has worked on numerous digital projects over the previous two decades, including Linking Parliamentary Records through Metadata (LIPARM) and Digging into Linked Parliamentary Data (DILIPAD), and offered some valuable advice about the management of digital humanities projects. She explained how the DILIPAD project, in particular, brought together three international teams from a variety of institutions, with separate funders, different reporting requirements, and academics from a huge range of disciplines: history, digital humanities, political science, computational linguistics, and computer sciences.

Winters explained that managing the different time zones, career stages, approaches and languages of contributors presented a real challenge, and underlined that finding a common language was necessary to maintain working relationships and allow collaborators to understand everyone’s different disciplinary practices. Given the difficulty of obtaining long-term funding for a digital humanities project, she also stressed the need for a central, democratic information store for recording the progress of a project and storing its resultant datasets, in order that a project’s data can be employed in the future outside of its original purposes. Bearing funding and impact in mind, Winters concluded by emphasising the need to ensure projects are open access. Crucially, open access ensures the long-term sustainability of a project’s data, by allowing researchers, who are often unknown to a project, to use a project’s data for purposes never thought possible, or even considered in the first place by the project’s original contributors.

Our next seminar takes place at the IHR on 30 October at 17:15 in N202, when Dr Sean Kelsey, University of Buckingham, will be speaking on Parliament, Putney, and the politics of settlement in the autumn of 1647